First day of our Advent Calendar we show tiny code snippets and brief informations for the Post Formats from WordPress version 3.1.

To use this function, you have to activate it with the Theme. This is controlled, similar to other theme features since version 3.0, over a function. The following syntax gives some of the possible post formats and these can then be used directly on the article, as the following screenshot shows.

Just put the code into your functions.php of your Themes. 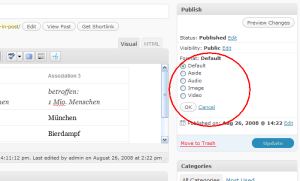 As possible keys are the following values available.

Like in thumblr you can design the according article. Via the defined values you can use this across themes. The format will be output with the function body_class() for instant, which creates a class, which you can access via CSS. An exmaple for the value Aside of the post format.

Alternatively there are conditional tags and functions to get to the assigned type:

As so often depends the creativity and usage on the developer. The biggest benefit is probably that defined values exist and as a theme author you can respond to these formats and as a developer you don’t have to create a new meta box. 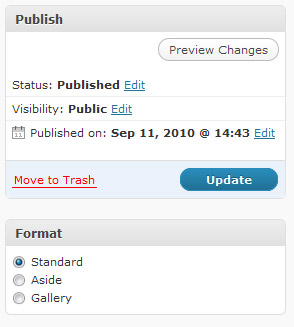 10 responses to “Post Formats – More Creative Ways For A Theme”