In version 2.7 of WordPress you will have the possibility to delete a Plugin directly in your backend, see version 2.7 info. To delete also the Plugin data from your database, the Plugin author has to accomplish some requirements. I hope the following tutorial will help some Plugin authors and they will implement this feature in their current or future Plugins.

Everybody who had the uninstall function in their Plugin, doesn’t have to change a lot. For everybody who likes to know, you can find the function for uninstall in wp-admin/includes/plugin.php

and the associated hook wp-includes/plugin.php

You can use two possibilities to add the additional function.

Up to Version 2.7 you were also able to delete the data from the database, but only if you deactivated the Plugin (Hook register_deactivation_hook()) or with help of a formular.

To use also other versions of WordPress, I suggest to use the constant WP_UNINSTALL_PLUGIN, because this one exists in version 2.7. Alternative you can use the hook register_uninstall_hook(), since this one is necessary to function via hook. Both possibles are listed in the following examples. 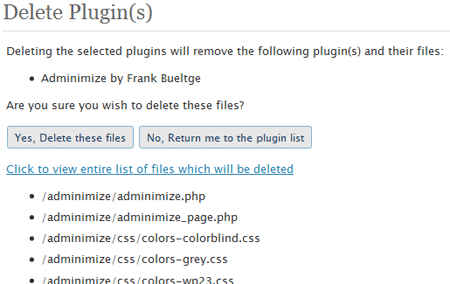 The following function for example should be in the Plugin and deleting the entry example from the database table options.

Easiest possibility is to create the file unistall.php with according entries to delete data in the table options.

To avoid an error in older WordPress versions, I recommend to use a constant. Isn’t there a constant defined, it will just stop in this example.

Alternatively you can register the deinstallation via hook, so that you are not depend on the file and you can use a easier possibility to integrate an uninstallation in your Plugin. For that you can use the hook register_uninstall_hook().

The possibility, to delete Plugins directly in your backend, certainly makes it easier for the user to get rid off unused data. But for that, the Plugin authors have to support this feature and the table options certainly will be thankful for that.

Webworker by passion, works with priority in WordPress, developing Plugins, themes and solutions. Frank writes in German language on his private blog bueltge.de [by:ltge.de]. He is member of WordPress Germany and writes about news in WordPress Deutschland blog and is author of a book for WordPress.