Last weekend I had the pleasure to be at the WordCamp Germany in Jena. It was great to meet many people there for the first time, even my team mates Frank and Micha. We never met in person before. So that was exciting but also other online friends and people I work with, like Sergej, a great guy and Plugin developer. 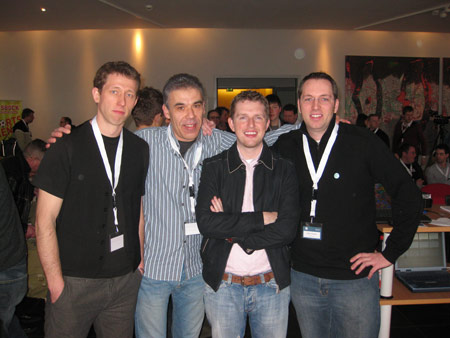 I was wondering how this WordCamp would be compares to the one in Dallas. Like in Dallas we had a get together evening at a great coffee bar before the actual WordCamp on Saturday. It was a really laid back and fun evening, about 50 people came to the bar and we talked about WordPress but also many other things while we drunk some beer. It was the same great atmosphere as in Dallas, everybody was exciting to meet other WordPress users, experts and we all where like a kid before Christmas, who can’t wait for the next day. The only difference between Jena and Dallas? We had much more beer that night. 😉

The next morning I saw many familiar faces from last night and new ones, who arrived at the morning. After a warm welcome by the organization team and the first session, Matt arrived and gave his keynote.

I recognized that he became a much more out coming person since last year. He did his speech relaxed and in a secure manner. You really could see, he did this quite often in the recent time. He was talking about the history of WordPress, 2.8 and the future, He showed us as a world premiere his new website design, which looks pretty cool and BuddyPress. It was interesting to listen to him and after his keynote he was open to answer questions of the audience. What also would have been great, if some other users could have been able to ask question online, as it was possible in Dallas for people who couldn’t attend at this meeting. 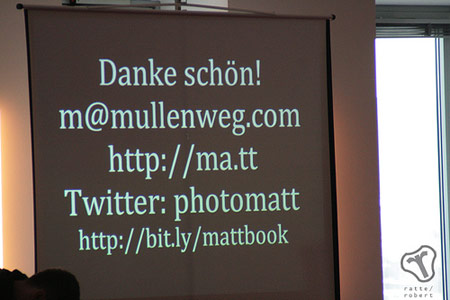 The sessions were pretty interesting and it wasn’t only about WordPress, there were also some about Habari, BuddyPress, CSS Framework like YAML and so on. I really liked that most of the session had an open discussion at the end of it, so everybody where able to ask, talk about their experiences, giving tips or just let out their opinions. To offer more sessions there were up to 4 different sessions in different locations. On one hand that was great and you were able to choose what to see but unfortunately I had to miss out some other interesting ones.

In Dallas we only had one big hall, which was awesome, actually the city hall of Frisco. The location of WordCamp Germany was also pretty cool, in the famous Jentower. At both location we had WLAN and catering. A nice setup, KUDOS to both organization teams.

Both WordCamps were great, as Matt said, all nice, smart and sexy people. It was an awesome atmosphere, no arrogant people who might think they all know it better, constructive discussions between each other, great things were shown on both WordCamps and new ideas were born. Looking forward to visit the next WordCamp, who knows, maybe there will be one in Amsterdam. Everybody who has the chance to visit one, go for it. If you are an expert or total beginner, for everybody it’s well worth it.

The only downside was, I didn’t get to try the world famous Thüringer Bratwurst (German Sausage from this area)

For everybody who is going to WordCamp India, look forward to an awesome weekend, I’m sure you will have fun as I had in the States and Germany.

Anybody else ever been at a WordCamp? Let us know how you liked it and what your experience was.