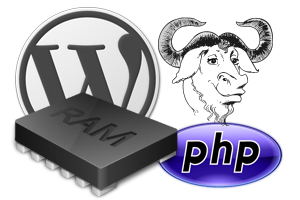 Since the release of version 3.0 of WordPress more people are seeking for help because of this problem: My memory limit is exhausted! I also had some problems while testing my Plugin Codestyling Localization with the new version when it was editing a large Plugins or WordPress itself.

So I started to research the problem, read other articles about this topic, made some tests and found out some surprising results.

Research and Incredible things in PHP itself

PHP is as pure and untyped interpreted language designed with a focus on massive text manipulation. Therefore, I expect no deal with memory, as in high optimized programs in C or C++ . However, what I was reading in an error report of PHP Trac made my jaw dropped. That they deal with so much memory just to get more speed is ridiculous. Here is the link to the entry PHP Trac #41053. Let me try to explain.

Let’s start with the example code of the PHP Trac entry:

What does this code do exactly? Not much, except:

Apart from the fact that in PHP 5.2.2 then again it looks like in PHP 5.1.2, I think 58 megabytes is a lot of meat which PHP needs just to store the data.

It also received an immediate explanation from the PHP team, why this is so. The internal structure of the variables of PHP can be anything at any time and must be convertible. Therefore, a simple integer value assigns in this way, according to data and my own PHP C code analysis, actually 68 bytes.

Thus, if each variable has an overhead of 64 bytes + load (string is usually more than just 4 bytes), then you can easily figure out how many variables you get in memory before the memory limit is exceeded. And we have not even calculated the program code itself yet!

Even worse is it in 64 bit systems, because the C structures of PHP are not correctly aligned in memory, as the IA64 architectures would like to have. There is thus additionally memory “padded” and an entry can have 80 bytes or larger. So that’s why PHP consumes on 64 bit systems significantly more memory than 32bit. How the 64 bit programming looks like and where the pitfalls are is explained here: Data Alignment when Migrating to 64-Bit Intel® Architecture.

The lack of understanding of hosting for 64 bit systems

Lovely Hoster, when you offer customers a 64bit server with 64bit PHP, then 32M or 40M aren’t enough. The internal architecture of PHP is not yet fully adapted to 64-bit systems, so it would be entirely memory-saving. In addition, the pointer in C code are actually twice as large, so executable code in memory and generated structures also need more space.
So either give the customer a choice or provide them adequately storage, everything else is self-deception and foolish.

WordPress Core Team and the carelessness in dealing with memory

I have a couple of words for the WordPress Core Team. You do make a good job. Everybody makes errors and bugs and the least think a new feature throughout. But you should not close your eyes and ears to the needs of the community that has made you so big.

(from the core file: default-constants.php)

It is finally time to admit what BS you have put in the code, and finally realize that WordPress 3.0 in a default installation will barely able to run on 32M and WordPress Multisite under 64MB is an illusion.

Might also mean that it is more difficult for users abroad with another not built-in language, go ahead and test it on your systems! Then you will notice that your implementation of the language files, processed under the above Memory usage of variables from a 360 kByte WordPress language file costs easily 4MB memory. With the Theme and each translatable Plugin more memory usage will be added and you probably see the end of the memory very soon.

What does it mean for me personally?

I will strive to continue its efforts to identify the memory hog and examine my own code to see if I can reduce the memory usage.
Therefore, there will be an update of my Plugin, which can then handle even the most adverse conditions with WordPress language files.
In addition I have limited a multisite installation artificially to 32M. Without a language file I’m already at 22M, with loaded language file it is already more than 26M and got another 4 – 6M space for the language file processing. Normally this isn’t sufficient at all, as you already read above.

That is why there is this new feature in my next update and my Plugin will scan under these conditions WordPress and large Plugins. You can even edit them. I can not guarantee anything, because it also depends on the amount of Plugins you have, but as long as its not just less than 4 – 6MB you have left, it should work.

I will analyze the memory hunger of some components and when I notice that there is something we can do about, I’m going to tackle it sooner or later.

If someone has interest to participate in the hunt for memory flaws, let me know. I hope you understand that I want to help but perhaps can not respond always in a short manner.